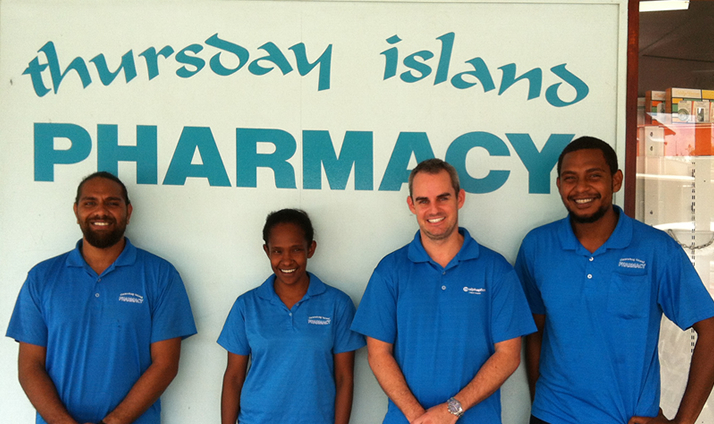 Trainer and Assessor Jane Larter was on Thursday Island recently visiting her students and she asked about their boss, Mick. They couldn’t speak highly enough of him and the work he has done on Thursday Island and when she asked if they would like to nominate him, they wrote the below:

“We, the staff of the Thursday Island Pharmacy would like to nominate Mick Delaney as the Boss of the Month.

As pharmacy assistant students, he has pushed us to excel in our studies by giving us the knowledge and understanding in the pharmacy to pursue a lifetime career. We are blessed to have someone like Mick to come to one place that he and his family could also call home.

We would like to take this opportunity to say, ‘Mina big esso’ (a very big thank you) for the hard work that you have put into making this a great working environment.”

Want to know more about Thursday Island?
Also known as ‘TI’ or ‘Waiben’, Thursday Island is located 39 kilometres north of the Cape York Peninsula. To give you an idea of how remote it is, we’ve included some distances from towns in Queensland:
Mount Isa: 1166.25km
From Longreach: 1,445km
From Cunnamulla: 1,980km
From Toowoomba: 2,157km
From Brisbane: 2,182km

Thursday Island is an area of about 3.5 square kilometres. The population is approximately 2,610 with most speaking Torres Strait Creole, a mixture of English and traditional languages.