With Christmas and News Years just around the corner, we’ve assembled the best and worst of hangover cures, to get you through those nightmare egg nog hangovers! 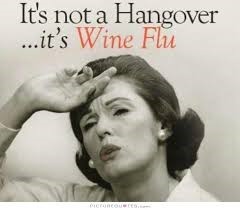 Once Alcohol (ethanol) is ingested, the liver begins the process of breaking down the ethanol into less harmful constituents. The process begins when the ethanol is converted by the liver to acetaldehyde, which is a highly toxic substance on its own. However, the acetaldehyde is quickly broken down into acetic acid (a less toxic substance) which can then be broken down further into water and carbon dioxide for excretion.

Alcohol is also a diuretic. This property is a result of the inhibition of the body’s natural production of ADH (anti-diuretic hormone) by the alcohol, which acts on the kidneys and prevents reabsorption of water.

Symptoms include general malaise (discomfort), thirst or dry mouth (dehydration), feeling dizzy or faint (low blood sugar), tiredness (sleep deprivation), loss of appetite, nausea or stomach ache (gastrointestinal complaints) and a feeling as though one’s heart is racing (increased cardiac output and vasodilation)3. Hangover symptoms peak when the alcohol concentration in the blood stream falls to almost zero 1.  We’ve all been there, although some suffer more than others!

In addition to alcohol, congeners (flavouring or by-products of the fermentation process) found in drinks increase hangover symptoms. Dark liquors have a higher concentration of congeners compared to clear liquors. So, for example, drinking Bourbon on a night out is more likely to increase hangover symptoms than sticking to Vodka as your poison of preference 4.  You might also find that your hangover is more severe after drinking only a small quantity of wine or liquor, when compared to someone drinking the same quantity of beer.

Fallacy
The following remedies are nothing more than old wives tales; try if you dare

There is no evidence that any treatment is very effective in curing hangovers 7. However the following will help relieve the symptoms and are good first aid for hangovers:

Rehydration: Drinking water or electrolyte replacement, while you drink (one for one is good ratio), before going to bed or later during the hangover phase will relieve or reduce the symptoms of thirst, dizziness, dry mouth and headache 5. Remember to consider other health conditions associated with the person when recommending electrolyte replacement.

Pain relief: NSAID (non-steroidal anti-inflammatory drugs) will treat the symptom of malaise but will have limited effect on headaches. They may increase the risk of stomach bleeding and liver damage 6. Paracetamol and codeine products may help settle the stomach and will have some effect on headaches.

Gastrointestinal complaints: Ranitidine will treat the heartburn or upset stomach symptom but check interactions with other medications or health conditions before recommending.

The best options in curing a hangover is to treat the symptoms, avoid over-indulgence in the first place and time cures all. Merry Christmas and have a hangover free 2017!