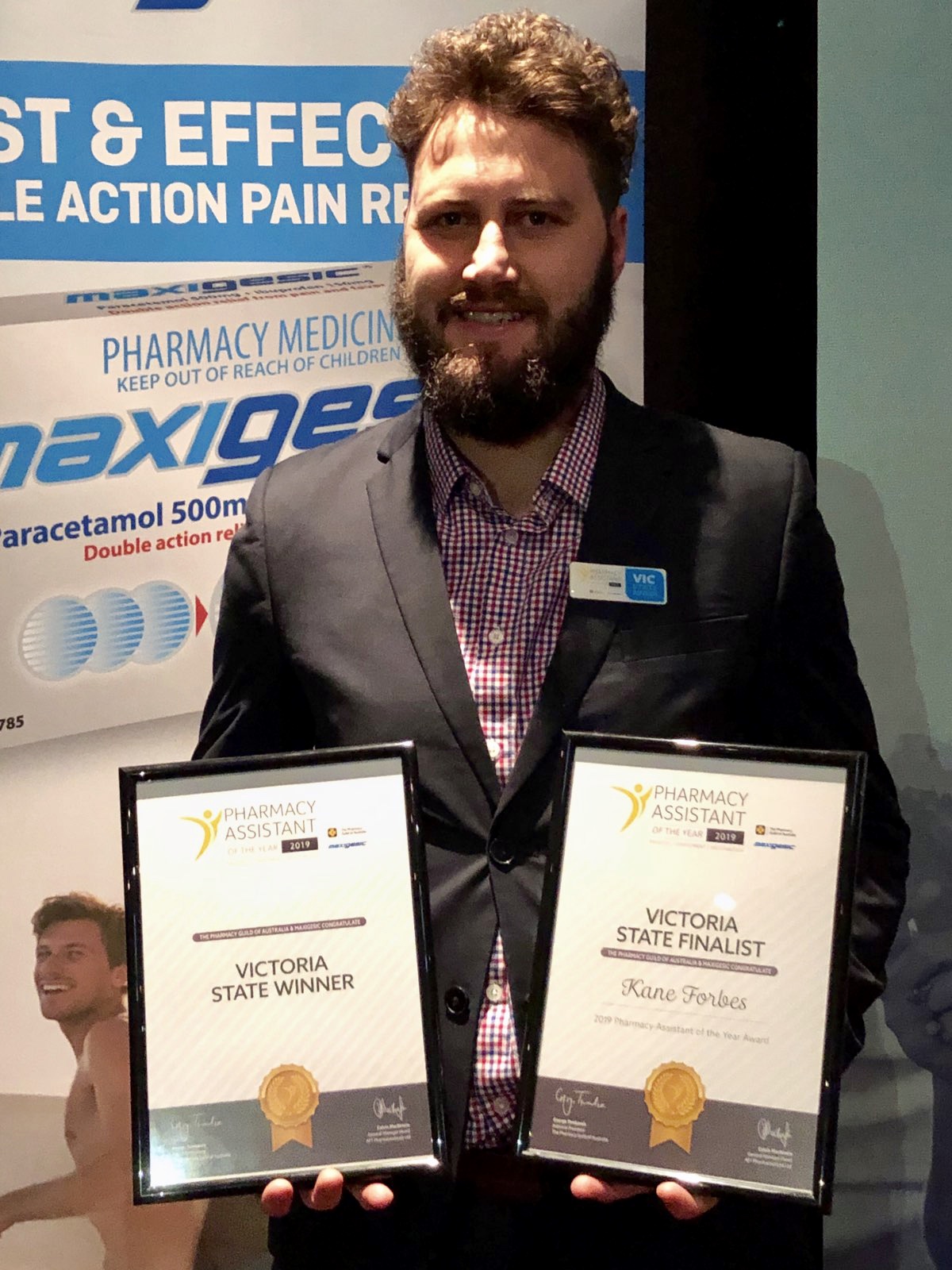 Kane Forbes from Casterton Pharmacy in Victoria has been chosen as the Victoria State Winner of the 2019 Pharmacy Guild of Australia / Maxigesic Pharmacy Assistant of the Year Award (PATY).

Kane will now represent Victoria during the National Finals, to be held at the Pharmacy Assistant National Conference (PA2019) in October later this year.

We sat down with Kane to find out more about his PATY journey so far.

How does it feel to be the State Winner? What was your reaction?

It’s a strange feeling! It’s very nice to receive everyone’s kind words and accolades towards me but there are definitely people in my position that would be just as worthy winners. I think it’s fantastic that the Pharmacy Guild of Australia puts on the Award. I think pharmacy assistants are definitely unrecognised for the amount of knowledge and the role they play on a day-to-day basis to help improve the health within communities.  To be a winner of a state for such a great award is an honour and privilege. I just hope that more people support the Award as I think we do play a very important role moving forward, because people seem to be more and more conscious about what they take and their health. It’s definitely a growing position for us in that aspect. I’m very happy and I’m never lost for words but I was quite shocked when I won. There were so many other great people in the room so it was definitely a surprise but I’m very, very humbled to be the Victorian winner.

Can you give me a brief overview of your career in pharmacy?

I finished Year 12 in 2009. I was accepted into university to become a primary school teacher. I just love working with kids and helping to develop people. That was where I was heading. I decided I would have a gap year for 12 months and earn some money. I was lucky enough to get a job at the pharmacy here in Casterton which is where I grew up and did all my schooling, not knowing exactly what it would entail or what the role meant. The careers teacher at the time thought that getting a job at a pharmacy would be a good idea for me to help with men’s health and also because of my sporting background, because I do love my sports. I was lucky enough to get the job. The day after I finished my last exam, I started in the pharmacy so there was no rest but that was ok. Basically I loved the job and never left!

It’s now been ten years in November that I have been here. I’ve completed a Certificate III in Community Pharmacy and my dispensary tech course. I’ve just enrolled to do a Certificate IV in the management side of things. I was promoted to Assistant Manager about five years ago and then three years ago, I took over as Manager. I’ve been the gift buyer, over the counter buyer, ethical orders – all those sorts of roles. My role has definitely developed over the years but all in all, it’s the interaction with the customers and the community feel that we have here. We are one of the small towns of about 2000 people so you know every customer that comes in. To know that you can try and help someone who’s in pain or who is sick gives you a real self-satisfaction. Now moving on as a Manager, to be able to help train and coordinate my staff is a new challenge that I’m working towards. It can be difficult at times but it is also very rewarding.

I was lucky enough to be a State Finalist last year as well as this year. Over the two years, I have definitely gained a few things. Last year the workshop was on customer service and customer care and the workshop this year was about the evolution of pharmacy and technology. This is something that is relevant that we need to keep on top of and move with the times. I think as pharmacy assistants, this is going to be very important for us especially with our clientele being the elderly community members, so being able to try evolve them to move in that aspect. The best thing about the workshop was yes, you get to learn some great content, but it’s actually being able to bounce ideas and the way people do things across different stores with different people that have the same passions as you. We live it and breathe it every day. It could be something so little that could make such a big difference that we don’t do in our store and vice versa, but you go wow, that’s actually really easy. If we implement that, it’s going to improve this, this and this. That side of things is what I’ve taken the most out of the workshop.

What have you gained from PATY so far? What are you most looking forward to?

The main thing I have gained is being able to try and pass on the knowledge I have and some of the things we do in our store here with some other members of pharmacy (and vice versa). To be able to bring some things back here that can help improve us which in turn then goes to the community and everyone around Australia is great. I think it’s about honing your skills whatever way possible, whether it’s your customer service, product knowledge, your processes or your procedures. Any little advantage you can get especially to compete against big discount stores is something that we need to try to continue to improve. Obviously there’s other benefits of PATY such as being able to attend the Pharmacy Assistant National Conference which I’ve never been to before so that in itself is exciting. To get as far as I have is fantastic and anything further I get from here is just a bonus.

What would you like to see change in pharmacy?

I’ve actually never seen another male pharmacy assistant so I’m a big advocate of trying to change the way pharmacy is perceived probably from the outside in. The way that people are conscious about their health and is totally evolving and I’d like to try and help evolve how pharmacy is viewed. I have seen firsthand how men, especially the elderly men, have taken to having male pharmacy assistants. Not because they are uncomfortable talking to women but there’s just a different level of connectedness I think between myself and some of the elderly men compared to some of the women. With mental health and other things being so prevalent these days, it’s so important to be able to talk to someone. I think this moving forward is really important for pharmacies and I encourage them if they’ve got males in sight to seriously consider them for the job. Just to try and change people’s opinions and views on that is something that I definitely think needs to be looked at. I think it’s great for the industry having a few male PATY State Winners and it’s something that we should really try and promote. Hopefully by there being a few guys in the National Finals of the Award, that will help change some things moving forward.

As for the recognition for pharmacy assistants, that’s definitely another part that is very important moving forward and I think pharmacies do a great job at that. I hope more people get behind PATY and sponsor the Award, and I hope we get more nominations and it gets harder and harder to pick a winner every year.

Why would you encourage someone (eg. employer) to nominate a person for PATY?

The owner of our pharmacy and I have discussed this one on one. His discussion around it was he doesn’t want to nominate people because he doesn’t want them to feel let down if they don’t make the State Final or if they don’t win. I think me going last year has changed his view on that. The knowledge and improvement you can get just out of talking to other pharmacy assistants is out of this world. You can’t compare it to any other training you do online or anything like that. It’s hand to hand people who are living and breathing this stuff. That in itself, to then try and improve your own store and customer service (which of course is going to then improve your profits), I think has changed his view on that which is fantastic. I think pharmacy assistants need to get every little bit of accolade they can because they need to know a lot of work and it’s definitely underrated as to how much knowledge you need to know, the risks and everything involved with medications. I think those two things combined is as good of a reason for anyone to nominate someone.

Why would you encourage a pharmacy assistant to nominate themselves or participate in PATY?

The State Workshop and the whole PATY process that you go through is fantastic. To get that experience and knowledge is second to none.

Will Kane be the 2019 PATY Winner? Find out at PA2019 and learn from all the State Winners at the conference. Register now at www.pharmacyassistants.com.