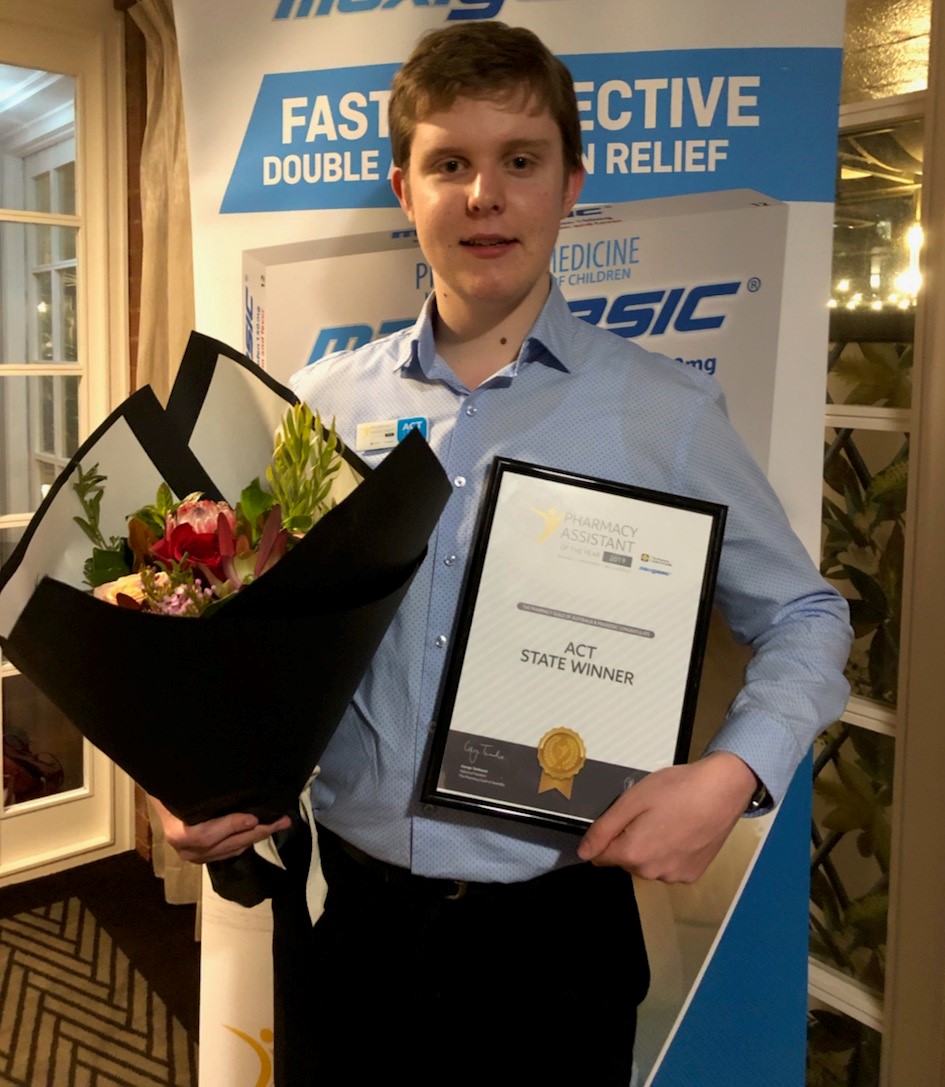 Jack Wales from Discount Pharmacy Macquarie in the ACT has been chosen as the ACT State Winner of the 2019 Pharmacy Guild of Australia / Maxigesic Pharmacy Assistant of the Year Award (PATY).

Jack will now represent the ACT during the National Finals, to be held at the Pharmacy Assistant National Conference (PA2019) in October later this year.

We sat down with Jack to find out more about his PATY journey so far.

How does it feel to be the State Winner? What was your reaction?

It feels very surreal. I’m still trying to process it but in many ways I’m very excited for the possibilities it will open up for me. It’s still going to take a little bit more time to actually process it (probably when I’m up in Queensland for the Pharmacy Assistant National Conference!) but at the moment, it feels good!

Can you give me a brief overview of your career in pharmacy?

I was mostly working in retail, but only in the last year or so I have transitioned into dispense work. In terms of my own career path, it’s mostly been working in a combination of front of the counter and behind the counter work. I have worked in pharmacy for three to four years now. I have completed by S2/S3 training and I am working towards the dispensary qualification.

It was a bit nerve-wracking leading up to it as you don’t know what to expect. But I think as an open forum for pharmacy assistants, it was really good. I found throughout the day just working with other pharmacy assistants from different stores was the highlight for me.

What have you gained from PATY so far? What are you most looking forward to?

PATY has given me a great deal of confidence. Even if I hadn’t taken out the State title on the day, I would have still come away from it with a lot of confidence about my ability to deliver an effective service to customers. Also, it gave me confidence in the potential of the industry to grow. It really did feel like we were seeing new solutions for old problems, and the future of pharmacy sounds very hopeful to me!

I’m looking forward to meeting more people throughout my PATY journey. It’s such a great opportunity to actually talk to other pharmacy assistants from other states. From coming off the State Workshop and being really enthusiastic about working with other people from my own state, to now taking a step up and saying I’m working with pharmacy assistants across all of Australia, well that’s quite the opportunity.

Why would you encourage someone to nominate a person for PATY or a pharmacy assistant to nominate themselves?

PATY is such a great opportunity. Even if you’re not going there to take the title, the State Workshops themselves provide a lot of really great information and resources for pharmacy assistants. If anyone who got nominated or nominated themselves shows a passion for their job in the application and moves through to the State Workshop, there’s a lot they can take away from that. There’s a lot I took away from it.

Backing yourself is probably the most important decision when deciding to nominate yourself or be involved in PATY. After working a few years, there’s always that risk that you do lose the passion in your work. I think opportunities like PATY are really good for pharmacy assistants. At the end of the day, you do have to back yourself because it is such a special opportunity for anyone who has been working in the industry.

Will Jack be the 2019 PATY Winner? Find out at PA2019 and learn from all the State Winners at the conference. Register now at www.pharmacyassistants.com.